Subscribe to our newsletter and never miss any upcoming articles

Before starting what is Kubernetes and lets understand how deployments were taking place before Kubernetes.

we were having three kinds of deployments :

Why We Need Kubernetes ?

In docker we maintain containers on the machines but what if machines gets crashed then we are no able to access that container. Here is the role of Kubernetes. Kubernetes forms a cluster in which it has several machines connected and on top of that cluster the containers are used. The advantage of this is if any machines goes down there will be other machines which serve container.

In general Kubernetes is a open source platform and container orchestration tool for automating deployment, scaling and operations of application containers. it follows the concept of Master and worker nodes cluster which are highly available without any downtime or we can say very minimum amount of downtime.

As we all know There is Master node and Worker node but how this cluster works. There are several components lets see one by one : 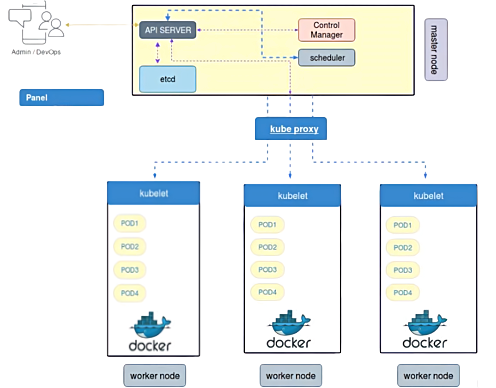 ETCD stores the configuration information which can be used by each node in the cluster. ETCD is Consistent and highly-available and store the data into key value format used as Kubernetes' backing store for all cluster data and It stores all the data used to manage the cluster. It is accessible only by Kubernetes API server.

There are Different Controller in the control pane each one has separate Process. They are all compiled in a single binary and working in a single process Some types of controller are :

It act as a agent it will receive the request and whatever the changes the control manager has assigned kubelet agent will make sure it should be applied correctly and give success or failure feedback. If Kubelet is not working the cluster will not be able to control the workload.

It is a network proxy which run on each node in the cluster. It maintains the network rules on nodes these rules allow network communication on your pods from network session inside or outside of the cluster.

Did you find this article valuable?

Support Cloudnloud Tech Community by becoming a sponsor. Any amount is appreciated!